Well week 2’s 3 days have kinda taken a while to complete.. due to weather, wind, and Golf.. Yes, Golf… I was planning to go out on Saturday, however I was invited to go and have a game of golf, so rather than jog for a while, I took the golf for 4miles option… and I was shattered after it, so I’m glad I didn’t do the jog too! Then Sunday was pishing doon, so I couldn’t go out then either.. well, I could, but I’m not going out in pishing rain, I’m not that dedicated!
One surprise though, on Saturday – Cheryl went out on her own for a run… well.. I’m saying she did, I physically didn’t see her go out.. she had her jacket etc when me and the lads were leaving.. she could have just taken her jacket and trainers off again and sat down in front of the telly – tempting?? I wonder ;o) 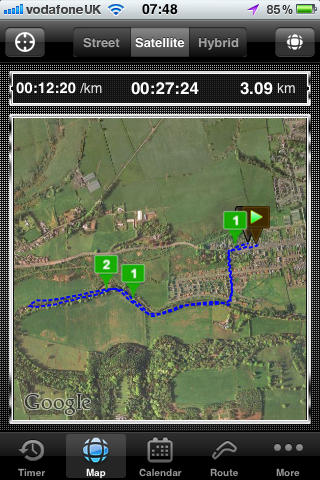 So today, dammit – just about to click start on my run-watch (for the iPhone) and the damn thing wanted upgraded from the trial version for £1.19, I wasn’t in the mood to argue… so I just went ahead and downloaded the thing… ach well – needs must and all that..
So – 2 minutes later and I’m offski.. down the big hill and to the river.. I decided to go a different route this morning, and only passed 1 dog walker, and some other person walking… (it was 7am – so quite odd) mind you they probably thought the same as me – it’s 7am – wtf are you doing running??!! (I had the same thought)!
So I jogged for 2.5minutes walked for 4.5mins all the way to the waterfall/dam and back again, up the hill..
And that was that.. nothing really exciting this morning, the river was low, the sun was out (and bloody bright) all in all – a really good morning..
Wake up it’s a Beautiful Day.