Yeah Yeah, It’s been ages since I posted on my blog….

However – time is right to start again.
What happened to the running… Well, I’m going to blame a cold, runny nose, summer cold, then a sore back and then a can’t be arsed attitude set in.
So there you go – running binned. 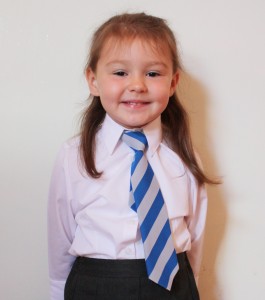 I said at the start of the Summer that I may well go back to my roots and get a MTB again… and it wasn’t until I mentioned it a month or so later to a certain “Lesley” that I decided to F**k it and actually get one… – in her words – “JUST GO AND GET ONE!!!”
So – after a few sales on ebay, I had enough money to go and get one…

Of course the Summer brought with it all manner of things – the biggest of all – the end of the Summer – Carmen goes to School..
and last week – yup – she started School – {scary icon here}
{oops – just looked at the clock – better go and get said child from School… and get dinner, and post etc etc etc}

1 hour later, we’re home, had last nights leftovers for lunch, collected a Steak Pie from George the local butcher who was ever so impressed with Carmen and her uniform!

Anyways, dropped Carmen off at School this morning – 8.55am – just made it – after miscalculating how slow Carmen would walk…
She lined up great, however there was a few screaming little ‘uns, bless….
(boys too – man up)!!!
Once again – there was no wave back – she just got on with it – well done gal. :o)

I came back and decided to go out on the MTB, so planned my route, replied to a few emails, generally faffed around until 10.30am, then decided to go..
Tracksuit bottoms on, trainers on, MTB jacket on, gloves on too…
mental note to self – get a water bottle holder (preferably one that fits a Contigo Travel Bottle)

Off I trot, down along the riverside pathway, past the damn/waterfall (this is normally as far as we go when it’s a family outing) I then continued on into Newmilns, then the ascent started… holy crap, I was soooo unfit… I was nearly half way around but decided to keep going – even though I’d never been that way, and didn’t have a clue how far it was back – and how many more climbs there were…. 1st gear is oh so good, but bloody hell oh so hard!! Not sure what the climb was overall, but I could clearly see Carmen’s school down in the village!
Then I got a break, downhill section through the forest no less – absolutely awesome – I so need to visit the Forest of Ae or somewhere that has MTB trails….!
It was then down onto the pathway again, and down to the entrance to the Lanfine Estate – there was a gate for pedestrians (that can JUST fit through (as it won’t open fully) so I had to lift my bike over the side fence! pfft!

After that is was just a wee cycle along the main road home..
shower and I’d love to say bed, but it was off out again to get Carmen (when I started the blog)

I’m now off to watch Thundercats with Carmen…
I may even try for a nap!
:o)